Last weekend I went on one of the most relaxing jungle retreats in Malaysia. Since moving to Kuala Lumpur, the jungle has become my favourite place to be. I’m fortunate enough that my condo faces one and I can’t go a week without getting a weekly jungle run fix. For ages, I’ve dreamt about taking things one step further and sleeping in it too.

If you prowl the internet for jungle stays near KL, heaps of results will show. But the only one that ticked every box for me was The Dusun.

This place was appealing because of their comfy, self-catering bungalows (with a private bathroom…no sharing for me!), complete with a BBQ and undisturbed forest views. Plus, unlike some of the other retreats I found, they’re not really a place where huge [annoying] groups come for vacations, and are great value for money for what they offer. 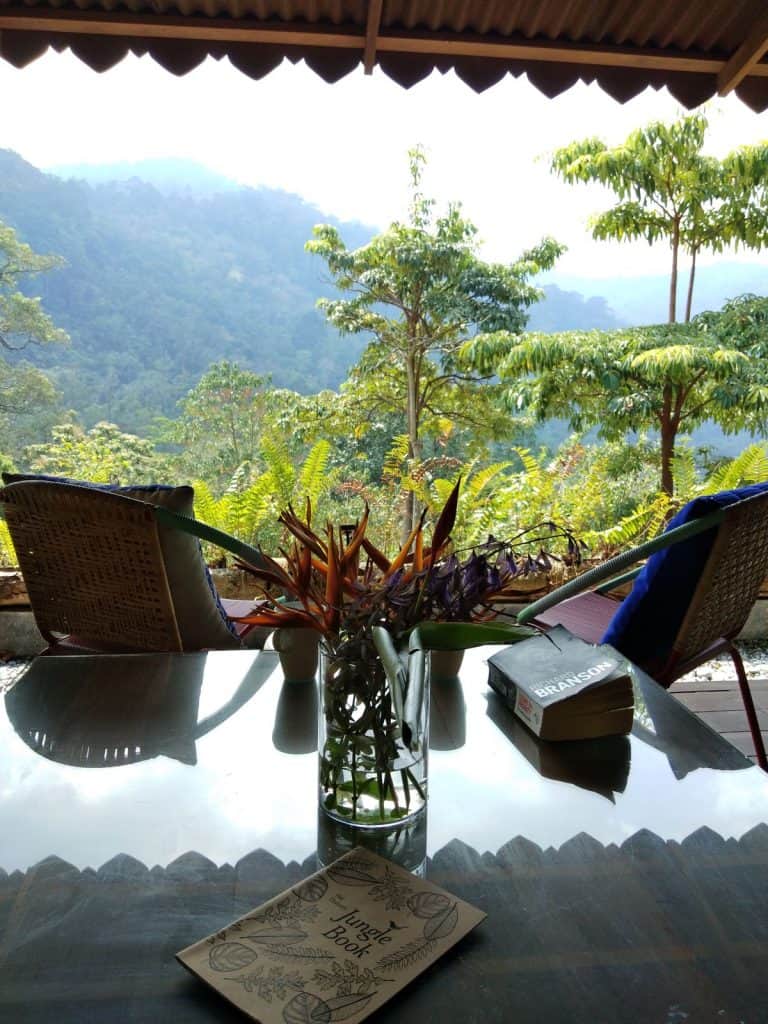 Just a mere 1.5 hour car ride south of Kuala Lumpur will lead you to The Dusun, perched opposite the hilly Berembun Forest Reserve in Seremban. The resort has been strategically positioned not only to be amidst nature, but have complete views of it.

Upon arrival we were greeted with panoramic vistas of tropical green foliage, with only the sound of cicadas gently buzzing amongst the trees. It was utterly therapeutic.

The living room was open plan without windows or doors, allowing the gentle breeze to keep us cool. We were showed around the spacious house by the friendly reservation manager and before she left, I coyly asked “Is there a key to the house?”

“No”, she replied, smiling.

I knew it was a daft question before I asked it… there’s no front door! I refrained from asking about the internet too.

We were in the middle of nowhere and it was perfect. At sunset, the resort staff came to light our BBQ and provided coal for a modest 20RM.

Whilst the Sailor cooked up some tasty lamb cutlets, I sat facing nature speaking to my sister over Whatsapp as the noisy bugs woke up in song. Even though she loved the picture of where I was, I told her that she probably wouldn’t be able to cope with all the bugs around! (She’s from London and squeals at the smallest insect.)

We had quite a few uncoordinated cicadas, beetles and other unidentified bugs pay us a visit on the first night, as well as a couple of swooping bats. But we stupidly had all the lights on. (The second night was much better as we turned them off!) The resort has two well-maintained infinity pools that boasts the same panoramic views. We only had one full day so headed there after breakfast and had it to ourself for hours.

If we had more time, we would have went jungle trekking too. Parallel to the Batang Penar River that flows below, there is an entrance to a track that leads to a waterfall.

Although it’s a relatively easy walk, the resort recommended that we take a guide as there are several forks in the track. It only takes about an hour to the fall, but you can get very lost in that time! Apparently they’ve had to rescue guests on a number of occasions.

The Dusun has a few different houses which are all sparsely positioned, as they believe in guests having privacy.

I thought our stay at Lanai House was even more lush because it was the most secluded. No-one needed to walk past as it was the farthest house in front and had its own path leading from the small car park.

After two nights of bliss, we could have easily stayed a week. The Dusun is the perfect place to recharge batteries after a crazy work schedule and leave feeling zen. As it was made so comfortable, it felt like a home in the woods. The owners, expats Helen, David and their 5 children used to come to the region in the 80’s for weekend chill-outs. Back then there were no amenities and they had to do everything themselves, like sourcing water, clearing land and building their traditional Malay-style house.

After some time in 2009, they decided to open their retreat to guests and built five houses to accommodate.

I loved how sustainable their practices were. They pride themselves on hiring staff from the local Kampung (village) and shop from small entrepreneurs and other responsible businesses.

Their resort respects nature and honours sustainable farming and building. They clearly take responsible tourism seriously, visible from their eco-friendly body wash, to non-use of pesticides and composting in house, amongst much more.

For the best rates, you can book via Booking.com.

As I searched for jungle retreats previously, a 20% off deal popped up in January as a sponsored link on my Instagram account. Do keep a look out at the beginning of the year for discounts.

The Dusun is just a 1.5 hour drive south of Kuala Lumpur.

We don’t have our own car but always rent one in Malaysia using GoCar. There are multiple GoCars dotted around KL, and we’ve found them more convenient and quicker to pick-up/drop of than a regular car rental. They’re also better value.

If you’re a new GoCar user, you can register via their website and then book via the app. They have a newer fleet of Renault Capturs at RM 109 per day, as well as their older Nissan Almeras at RM 90 per day. All you need is an internet connection to get going, which unlocks the door and gives you a code for the key in the glove compartment (apart from the the new Capturs which work solely on internet connection).

As GoCar (and most other rentals) only offer a basic insurance coverage, we always purchase additional protection through RentalCover.com. Their policy insures you against all the things that car rentals do not, including zero excess. For two days cover, we paid £19.60 GBP which insured us up to £60’000 and additional drivers are free. Related Read: Fancy a weekend getaway in the country?
Mangala Resort and Spa

We always used to use Google Maps on our phone to navigate on the road, but the Waze app is much better! Particularly in Malaysia, it’s great at giving you live updates (Malaysians are fab at reporting hazards!) including traffic delays, and the app is easy to follow. Plus, the lady voice has an English accent that’s entertaining when she pronounces Malaysian places 😄

You need this for toll roads in Malaysia, which are everywhere. The card costs RM10.60 and you’ll need to top it up. Most petrol stations sell them or 7-Eleven convenience stores. If topping up on the highway, be sure to have cash handy as they don’t accept cards.

Tips For The Trip

Fancy going? Pin it for later! A Guide to Kite Resorts & Kite Schools in Kalpitiya