Far North Queensland is home to more species of dangerous animals than anywhere else in Australia which believe me, in this country, is saying something!

It’s a place I’ve happily called home for two years and where I’ve come to learn about some of the “wild” residents that’ve been roaming this planet for millions of years longer than longer than I have. One of the oldest of the lot is the prehistoric saltwater crocodile- or ‘saltie’ as they’re known in Oz, which fascinate me just as much as the idea of running into one makes me want to crap my pants. Although having them as neighbours may not be as bad as you think.

In Queensland saltwater crocodiles can be found from the tip at Cape York and as south as Gladstone which basically spans the entire Great Barrier Reef, so no natural waterway here can ever be regarded as 100% croc free. Although thankfully the state doesn’t have anywhere close to the number that exist in the Northern Territory but as you can imagine, learning to be crocwise becomes second nature.

In my hometown London I had to be streetwise, here I’m crocwise. Although statistically, living in London is by far is more dangerous.

On average, there’s one crocodile attack per year in the whole of Queensland, of which one fatality occurs every three years. Comparatively there’s about 149 murders in London per year, and about 150’000 knife crime offenses. 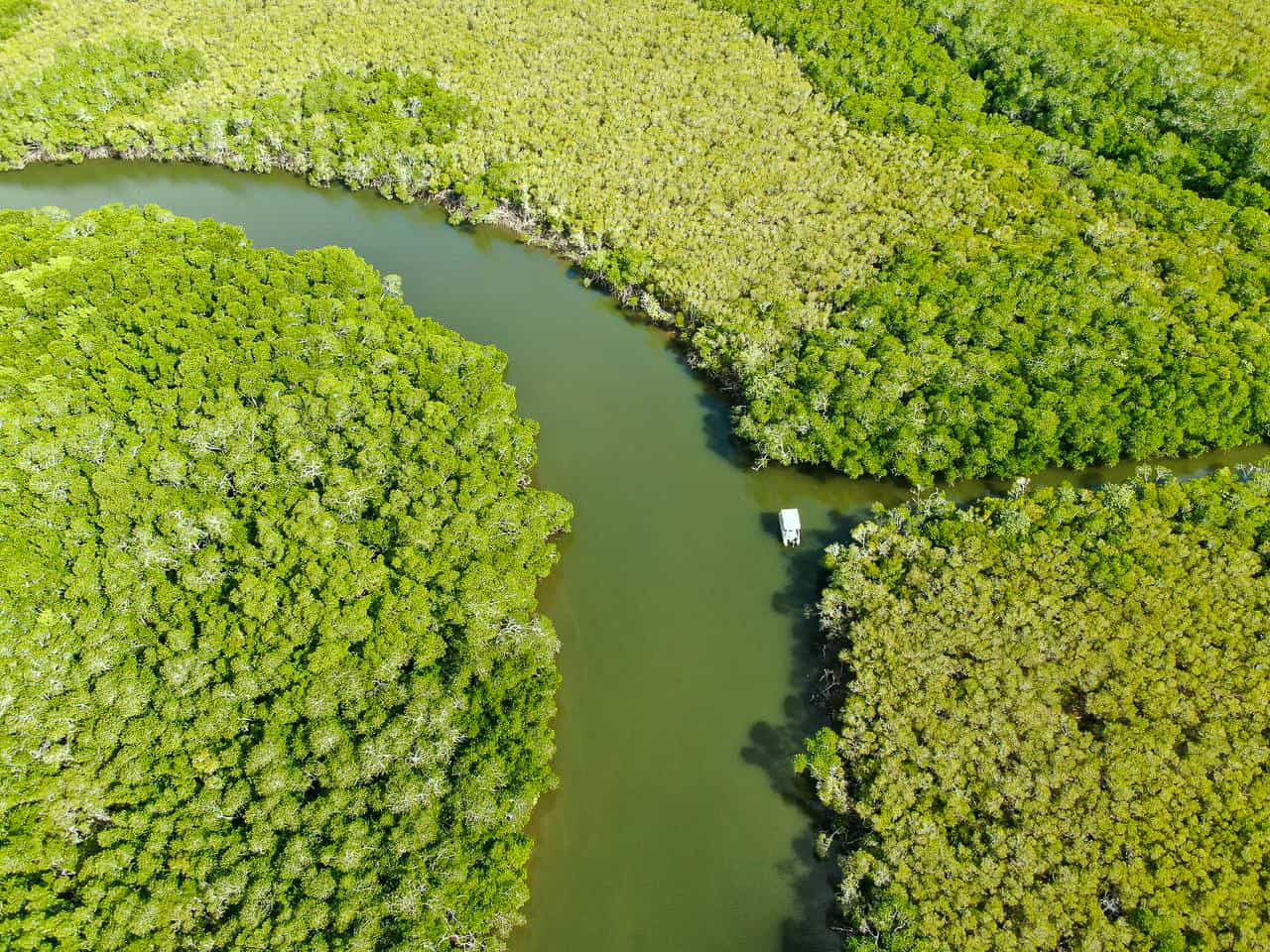 Yet while this may be croc country, I actually didn’t see my first wild one here until recently, after 2-years in the area. The Sailor and I were on a croc-spotting/fishing trip along Dickson Inlet in Port Douglas where you can hire a little tin boat and drive yourself up the creek.

We were last here five years ago when, just after I’d baited my rod and lobbed it into the water, the Sailor was down on one knee proposing! I was not expecting it at all. 🥰 This croc-inhabited area holds a lot of fond memories for us.

Judging from it’s nobly skin and broader-looking snout we presumed it was a saltie and it was a modest 3 meters or so. Upon closer inspection it appeared to be missing half of it’s tail which indicated that perhaps something, bigger, had bitten it off. 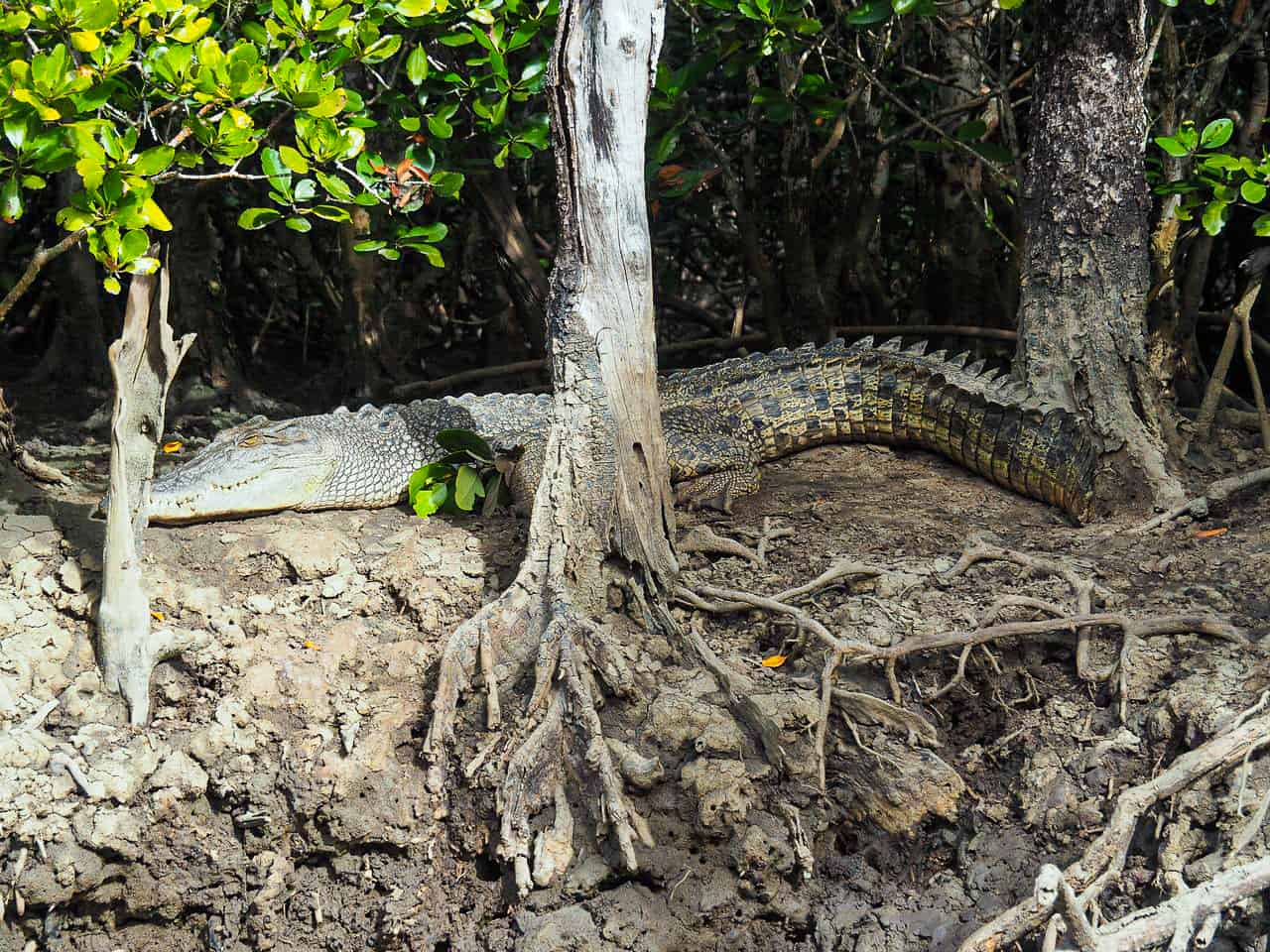 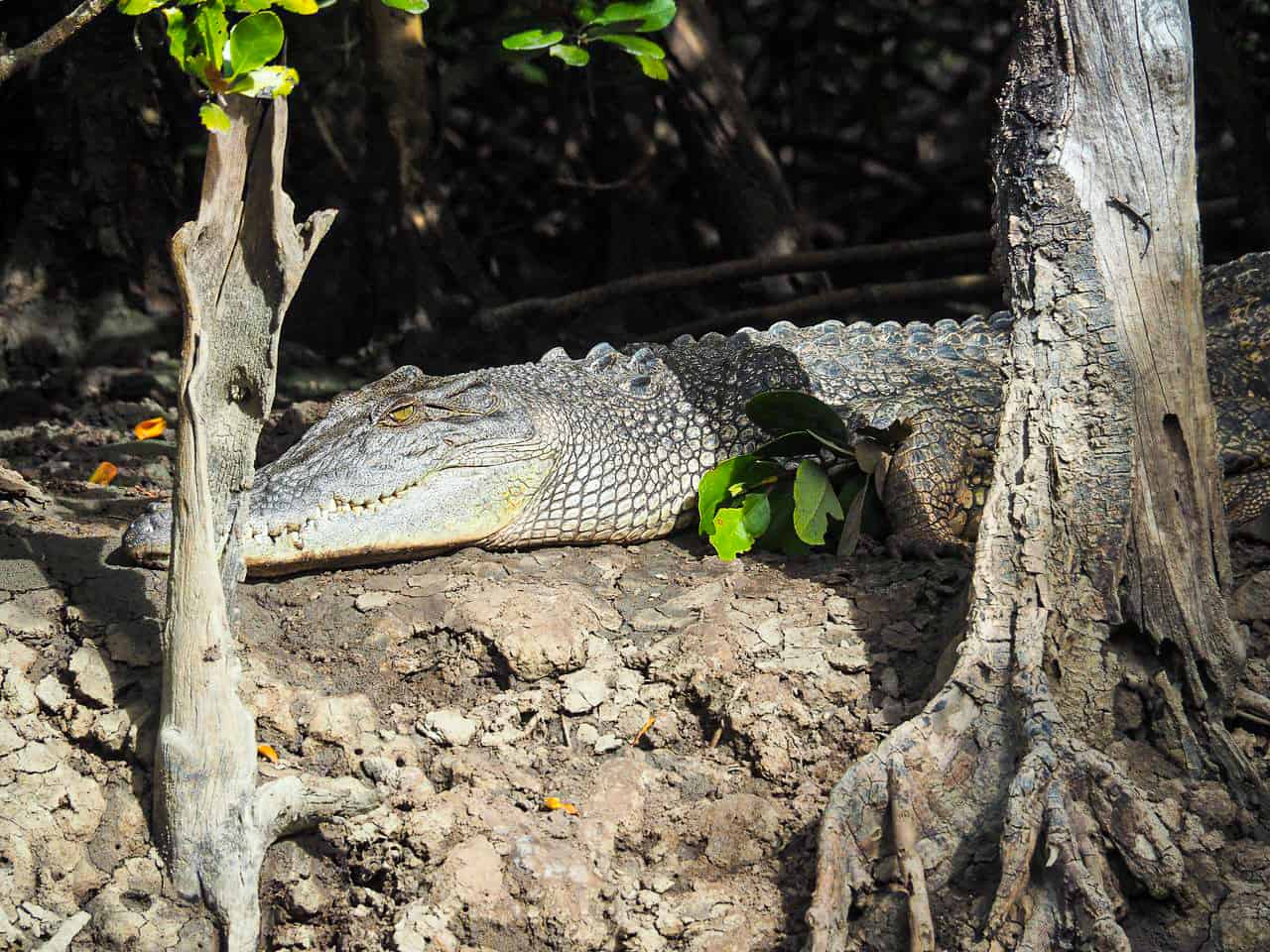 You could also clearly see a trail where it pulled itself up on the sandbank to leave the water and then we started spotting these trails everywhere. I asked the lady at the boat hire if she knew how many crocs lived along the creek here and she didn’t know but estimated about 6-8.

Since then we’ve had two other sightings of a much larger saltwater croc nearby around Mowbray River which was about 4-5 metres! I’ve been trying to grab a picture of ‘Big Mo’ at low tide since then but we haven’t seen it for a few weeks.

Later I read that crocodiles are more commonly found basking on the banks during the “winter” months to better regulate their body temperature, so that’s a good time to spot one, if you’re keen.

During my time living in Port Douglas, I’ve learnt a lot about crocodiles from the locals who have a wealth more knowledge than me and all over non-residents or sensationalist news reporters who always inaccurately describe waterways here as “infested”. Roll eyes. 🙄

For example, taking a skinny dip at dusk or dawn around certain beaches probably isn’t the best idea as this is when salties are actively hunting. During the day they’re more opportunistic predators but you should still avoid places like creeks & rivers which is their main habitat and where most recorded attacks happen. 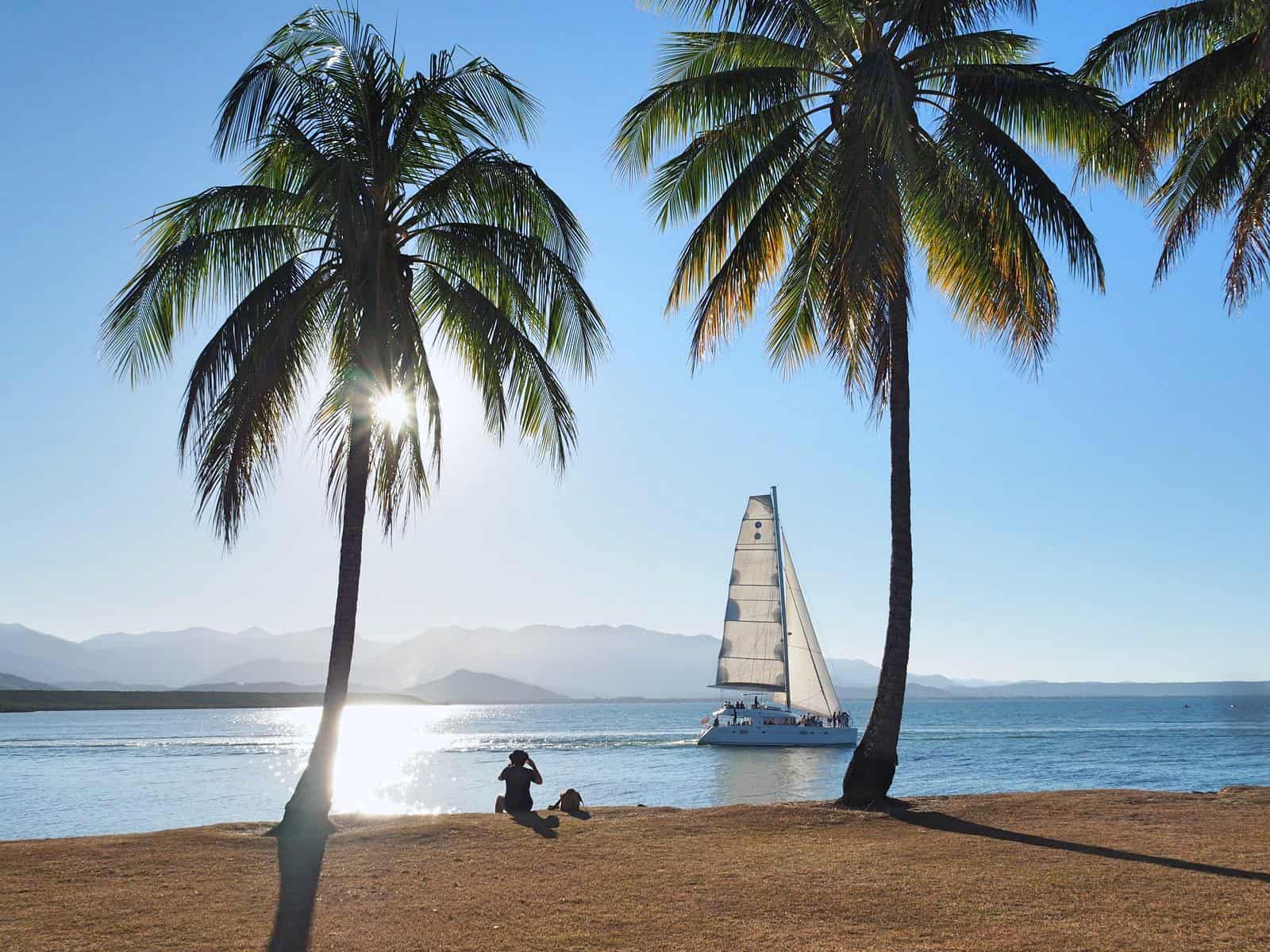 Occasionally they venture out from time to time to travel to a different creek or find a mate during breeding season (from September/October) and this is where you’re more likely to see them crossing a beach in Far North Queensland, which often takes tourists by surprise.

They do live in a couple of lakes at golf courses in my neighbourhood too which often scares the beegees out of unsuspecting golfers! A fun pastime for the Sailor and I and many other locals is eating a delicious brunch at St Crispins which overlooks one course and trying to catch sight of the resident croc. I think he’s called Crispy. 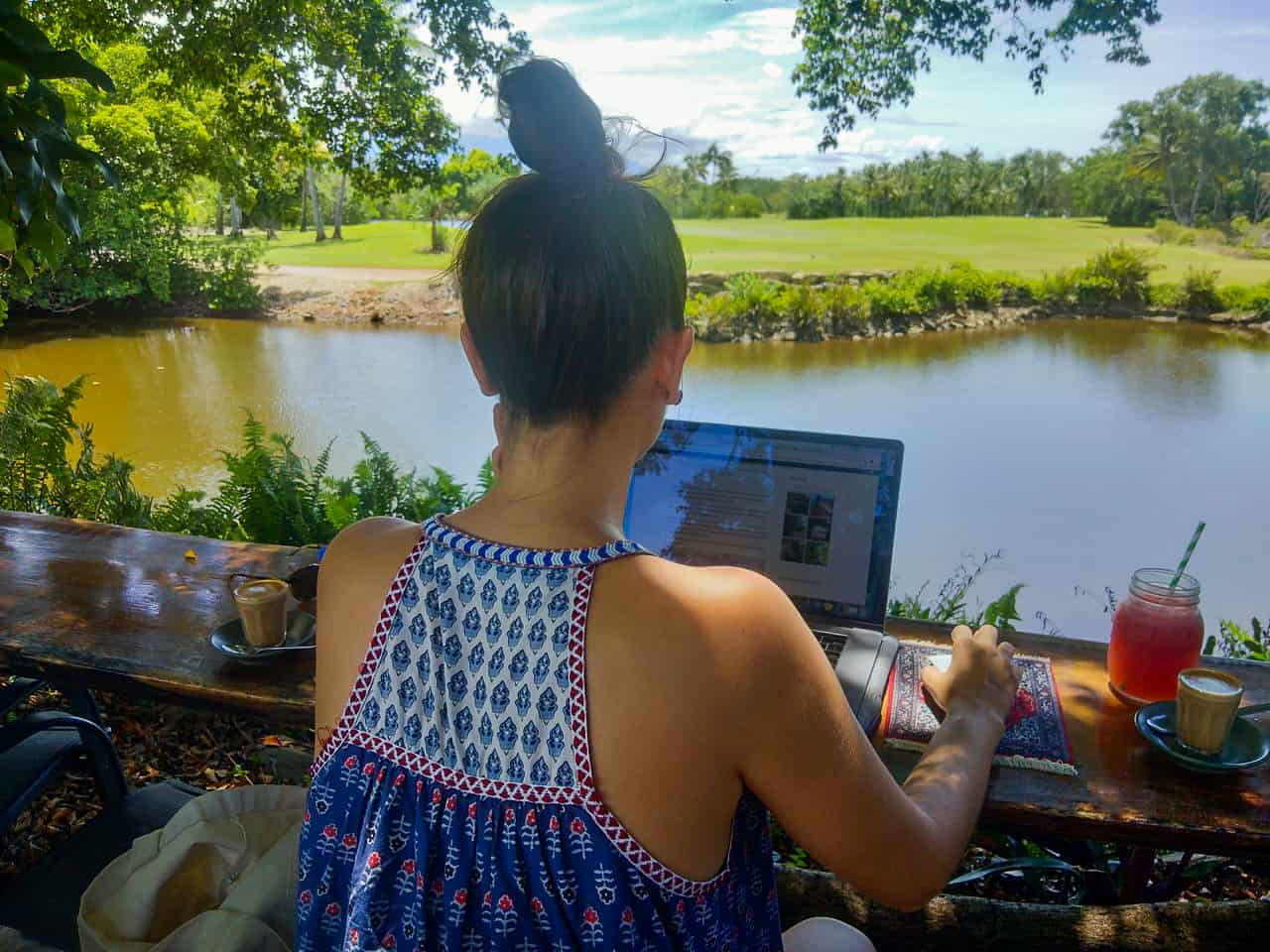 My beach (Four Mile) is the last patrolled beach as you travel North up the Queensland coast and as an extra precaution, it’s advised that you swim between the flags where lifeguards are present.

From here and further south, due to increased human communities there’s a crocodile management plan so if there’s any “problem” salties or ones over a certain size then they’re removed and relocated, often to a farm. Word of mouth is that they’re then culled, which is a sad fate if it’s true.

Beyond Port Douglas, human populations get smaller and saltie populations grow, meaning that it’s not advisable to swim at many beaches north of here, particularly around the Daintree and Cape York (and especially if there’s a creek that feeds right onto it). Sadly not all tourists are aware of this or don’t take warning s seriously, like the unfortunate case of Sydney-based Kiwi Cindy Waldron.

In May 2016, Cindy was holidaying with her friend in the Daintree when one balmy night, she thought it’d be okay to take a dip on Thornton Beach.

Now I’ve been to this particularly saucy beach and know how tempting it is to want to go in, especially during the throes of summer when it’s sticky hot. It’s also the prettiest beach I’ve seen so far in North Queensland making it quite a tease. But a local warned us pretty early on that the beaches around there are not fit for swimming, and to do so at night especially is a big no-no. 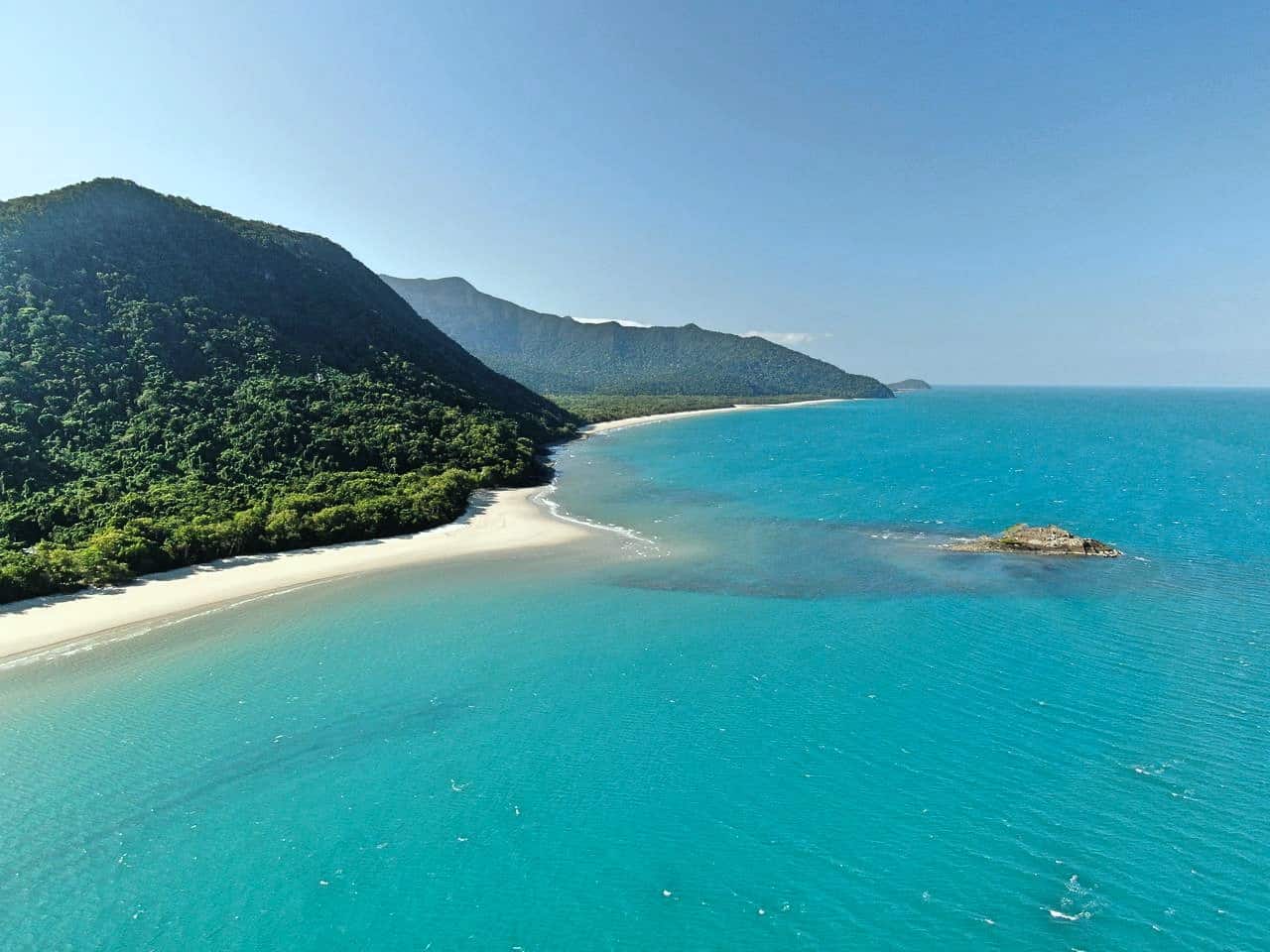 As Cindy waded through waist-deep water under moonlight, the last words she screamed were “A croc has got me!”, and was sadly never seen again. Some time later a 4.3 meter croc was found with human remains inside which was presumed to be Cindy.

As the owner of local crocodile tourist attraction says, “A little common sense goes a long way – it’s very easy to not be eaten by a crocodile.”

This was one of the last known deaths in Far North Queensland. 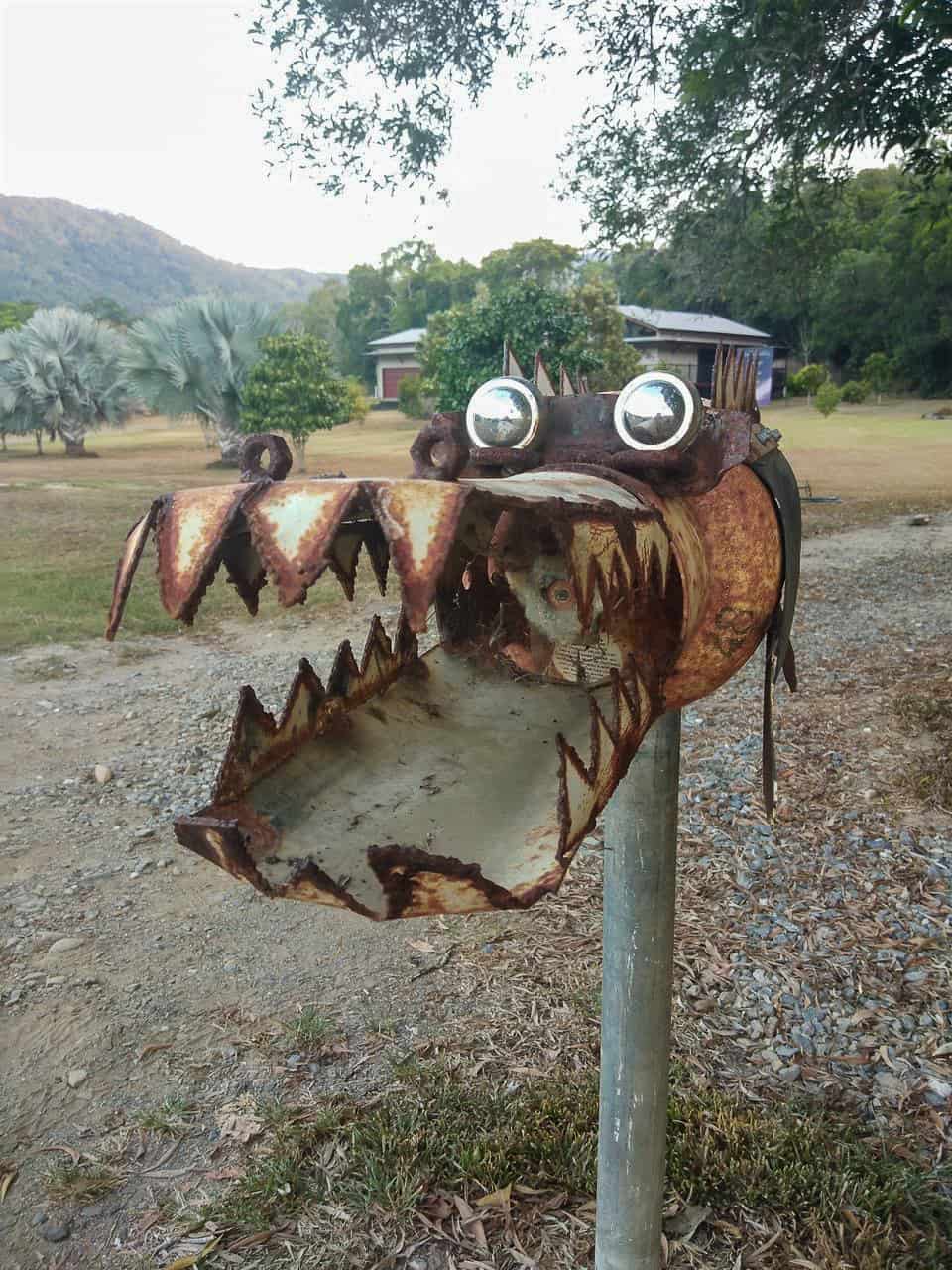 Whilst I can’t say that saltwater crocodiles would be my number-1 choice of local animal to have around, I respect that this is their habitat and they’re important to the ecosystem.

They’ve certainly been roaming these waters for millions of years before I have and up here it’s just something you learn to live with, in the same way that Great White Sharks are common elsewhere. Thankfully we don’t really get those in Far North QLD as the crocs seem to keen them at bay.

Wherever you go in the world there are dangers, and living here, salties are one of mine. Whilst occasionally the thought of running into one scares me shitless, they’re amazing animals that you should de finitely find out more about if you ever adventure here.

As always, be crocwise ✣ 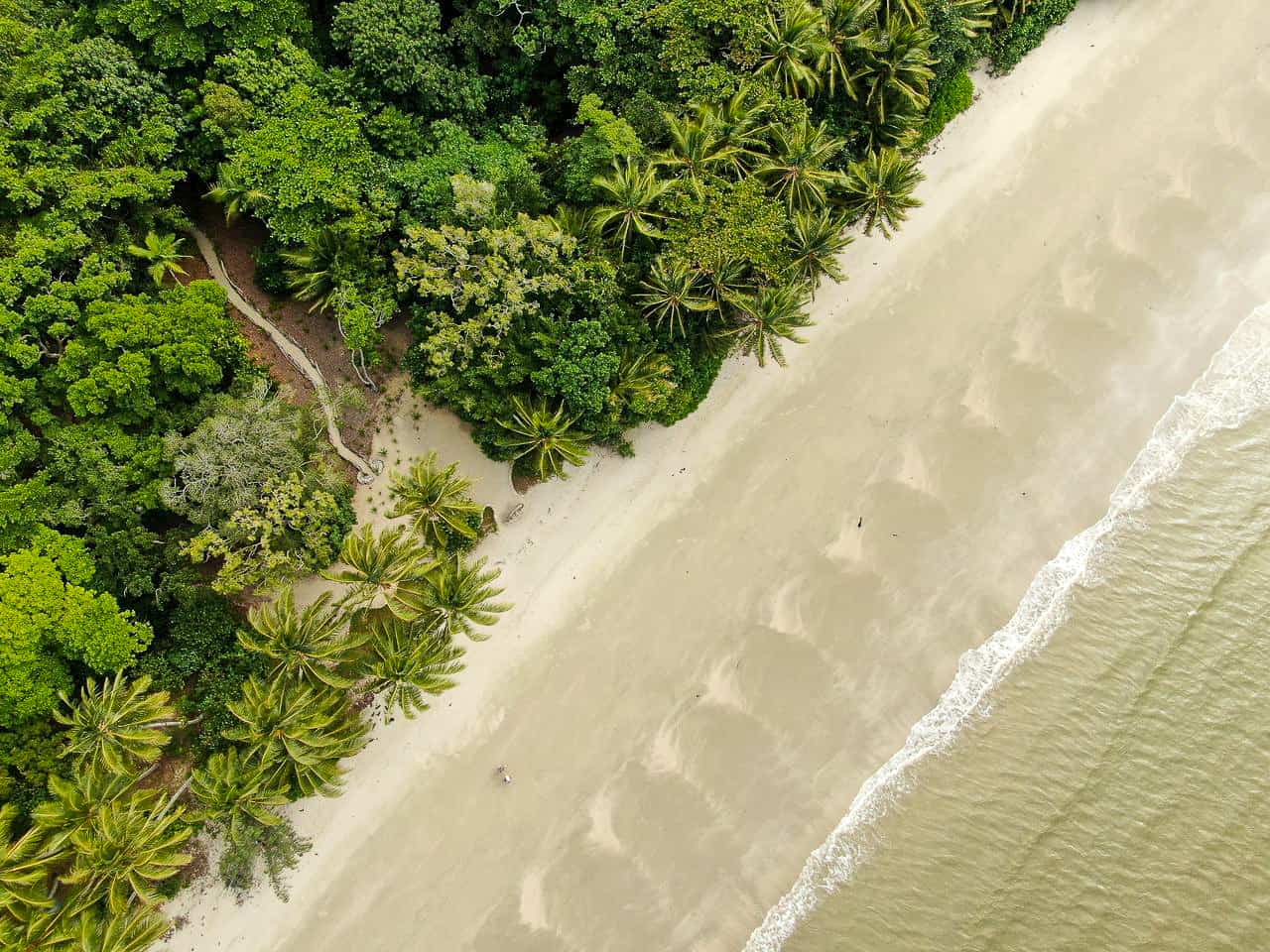 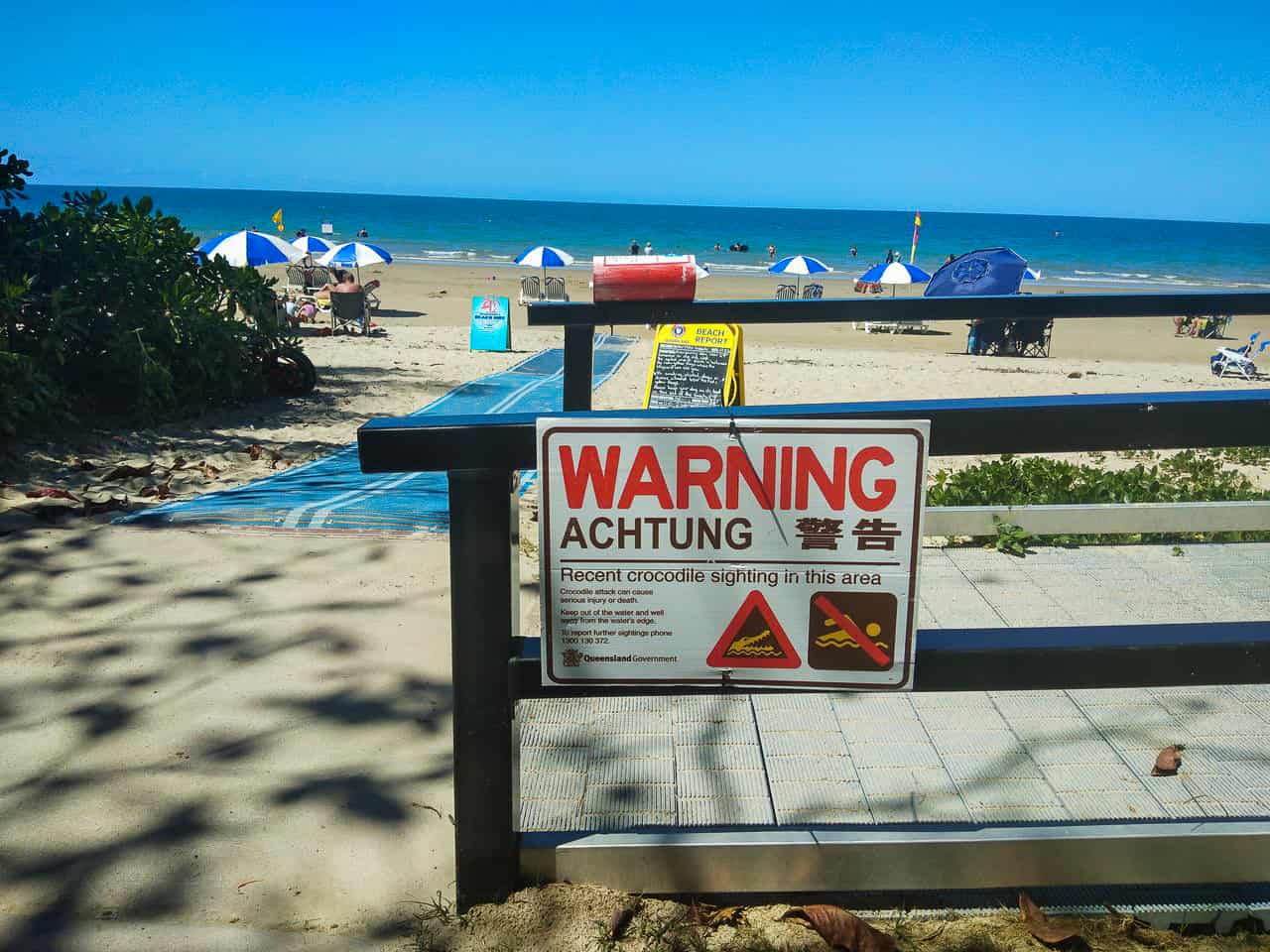 I’ll finish off with a story I read recently when I stayed at Wildwood in Cape Tribulation. They had a book there that piqued my interest called ‘Wilderness Coast’ which was all about the remote coastline from Port Douglas to Cooktown, and one chapter was dedicated to crocodiles.

The Author, Glenville Pike, tells a story about a guy called Bob Norman who was a local pilot for 35 years, who mentions seeing crocodiles in all sorts of places.

One day Bob went to a place called Possum Hole to collect drinking water with his friend Bill. After they filled the tank, Bill then dived into the water which took Bob by surprise.

“Hey, come out of there! There’s crocs in there”, he yelled.

“Nah, you can’t fool me. This is freshwater!”

Feeling frightened, Bob was able to convince his friend to leave the hole and went on to explain that he used to see crocs in freshwater, which Bill laughed at and still thought was a joke.

It wasn’t until a while later, a crocodile hunter called Henry Hanush arrived to the area and asked if there were any reports of crocs nearby.

Bill explained, “Well, Bob says there are crocodiles in Possum Hole, but there can’t be. I swim in it every time we go there for water”. So Henry went to Possum Hole that night to see if Bob happened to be right.

With his torch in one hand and rifle in the other, he found numerous dead carcasses of cattle wedged under trees.

Then he went on to shoot 17 crocodiles in the water. 😳

When Bob asked Henry why Bill was spared each time he went swimming in the hole, the reply was “Too much tucker”. It seemed the crocs had more than enough food without the need to eat Bill.

Apparently they were also scared of the gunshots which is why Henry was spared. 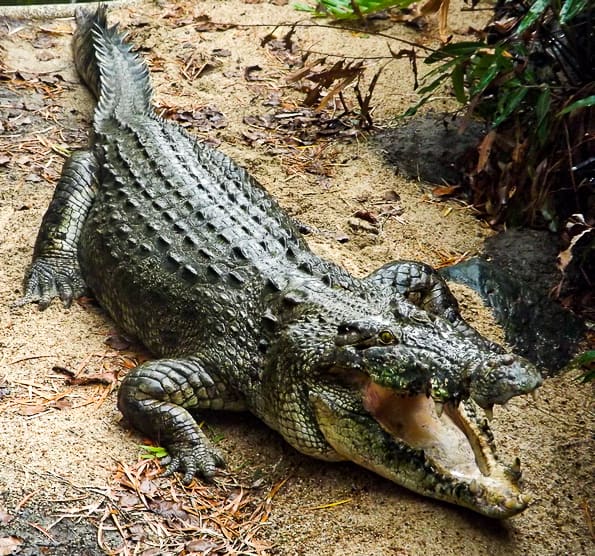 Have you ever had to live with dangerous animals or encountered them on your travels? Comment and share below!

For information on staying safe in crocodile country, visit the Queensland Government website. 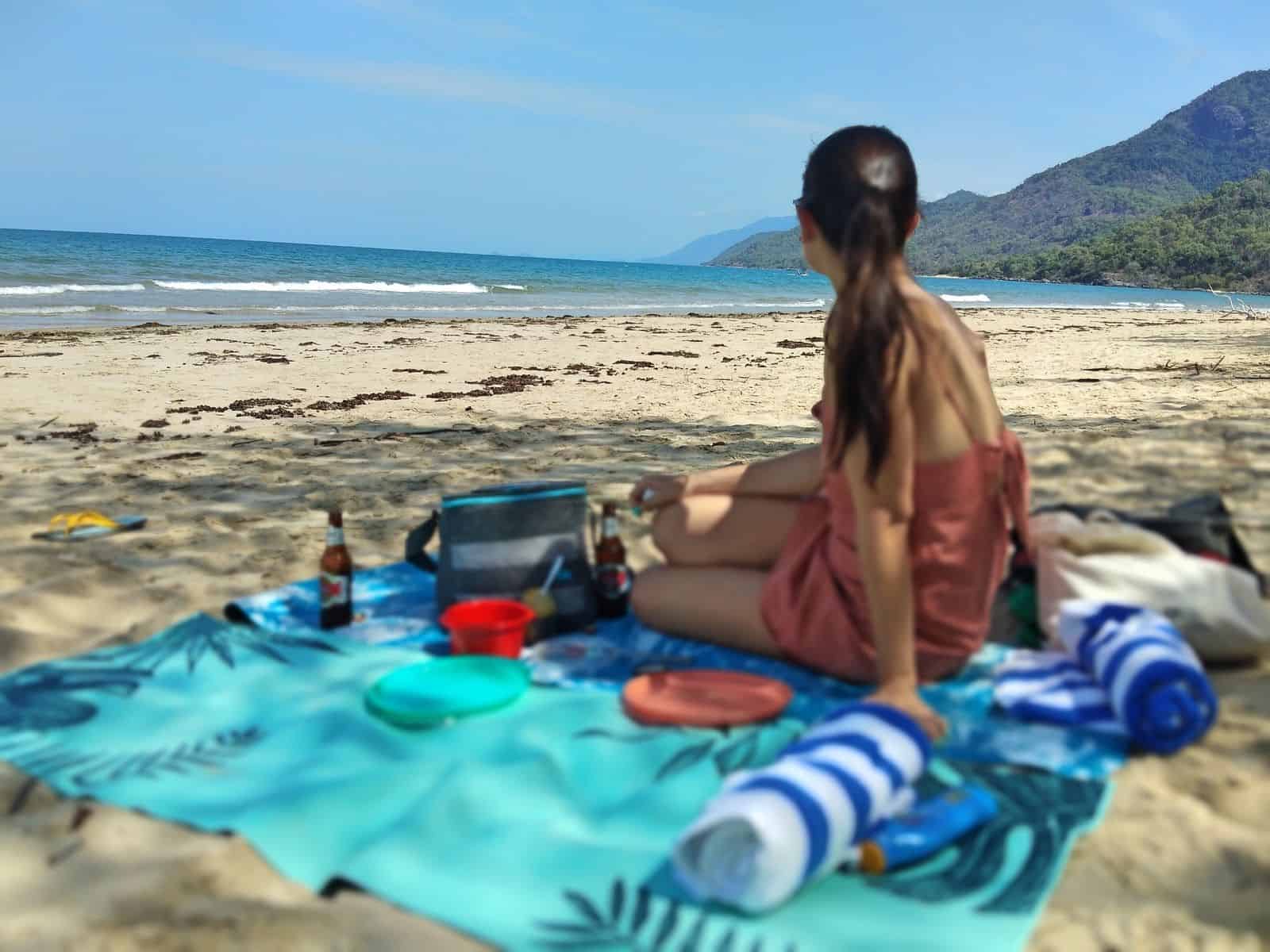 If you’re venturing up to the Far North then I’d highly recommend checking out some of the saltwater crocodiles that live in the area, from a safe distance of course.

They’re truly incredible animals and by observing them you’ll understand them a little better. Here’s a few experiences I’ve tried and tested:

Hartley’s is a long-standing, eco-certified attraction in Wangetti (between Cairns & Port Douglas) where you can take a tour of their farm to view crocodiles and other wildlife, watch educational presentations or take a boat cruise.

This tranquil creek is a good place to spot crocs if you’re in Port Douglas. You can hire a boat to travel up the creek yourself (with optional fishing), or take get a ride with Lady Douglas who also give an interesting commentary.

This eco-certified & award-winning wildlife enclosure have a few salties to check out and offer a croc-feeding presentation- click for more deets.

Ride down the river of the world’s oldest rainforest for a chance to spot saltwater crocodiles and other endemic wildlife in their natural habitat.

✣ If you’re about during sunrise or sunset then I’d suggest going with the highly rated Daintree River Wild Watch. Tours are with groups no larger than 10 and local naturalist Ian “Sauce” Worcester is passionate about all things wildlife along the DR. Click here to read reviews & book.

✣ For 1-hour cruises throughout the day I’d highly recommend eco-operator Solar Whisper. Groups are no larger than 10 and they’re the only zero emission boat which is a great way to minimise your impact. See here for more deets. 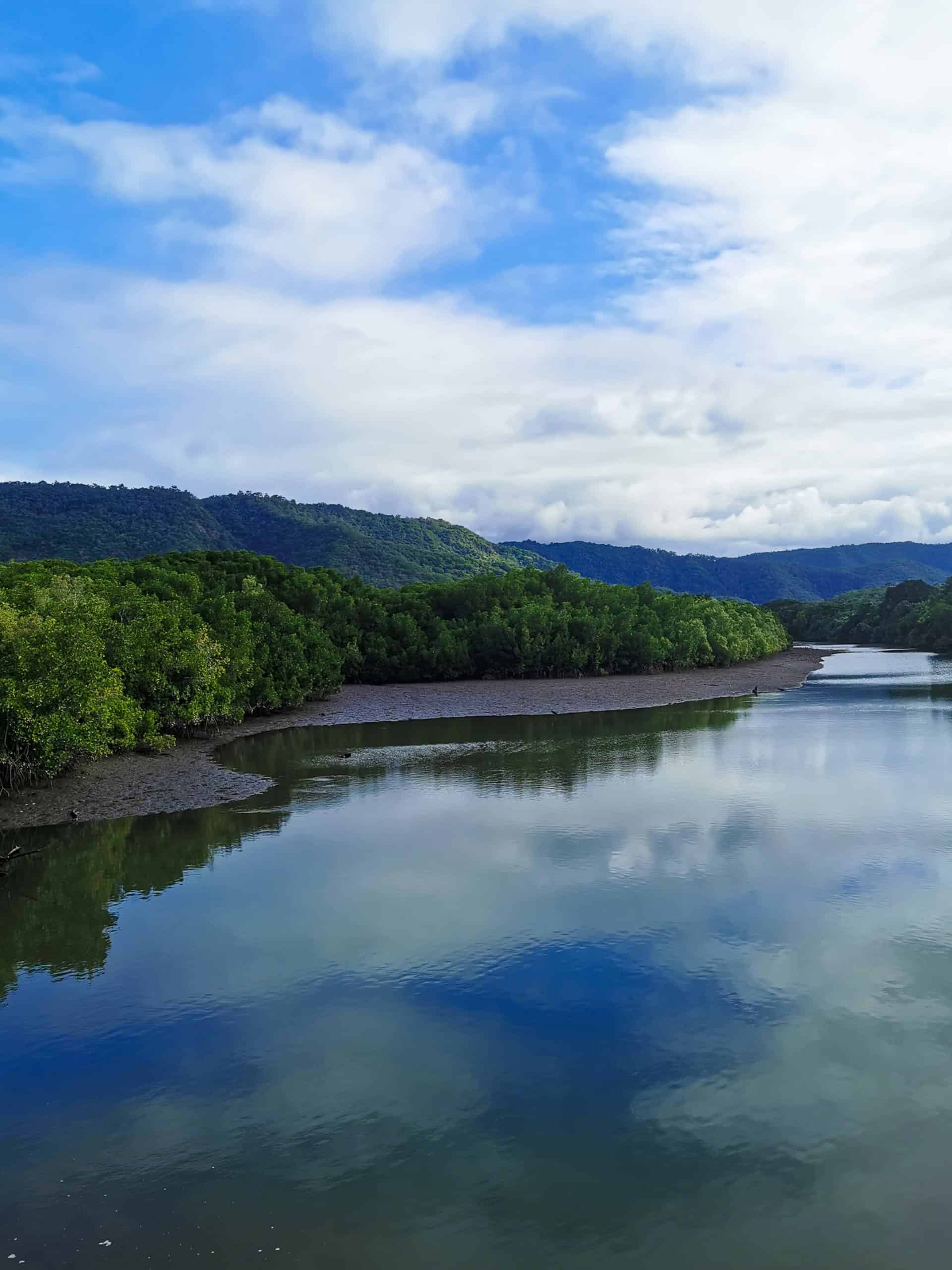 A new parking lot and lookout has been constructed at Mowbray River in conjunction with the new Wangetti hiking trail. You pass the river on the Cook Highway about 9k south before Port Douglas.

If you park and walk under the bridge on the new path, then at low tide you may be lucky to spot Big Mo chilling out on the sandbank, or one of his girlfriends. Site pictured above. 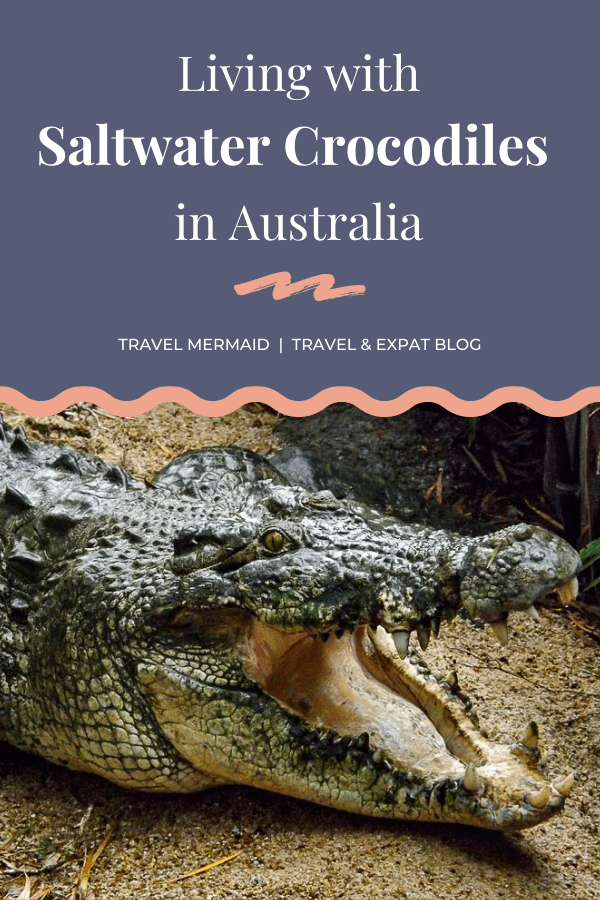 Disclosure: In this article I’ve included some useful links of which some are affiliates and support the running of this site, of no cost to you. I only recommend products & services I use personally or trust. Thank you for supporting Travel Mermaid.

What’s on this page